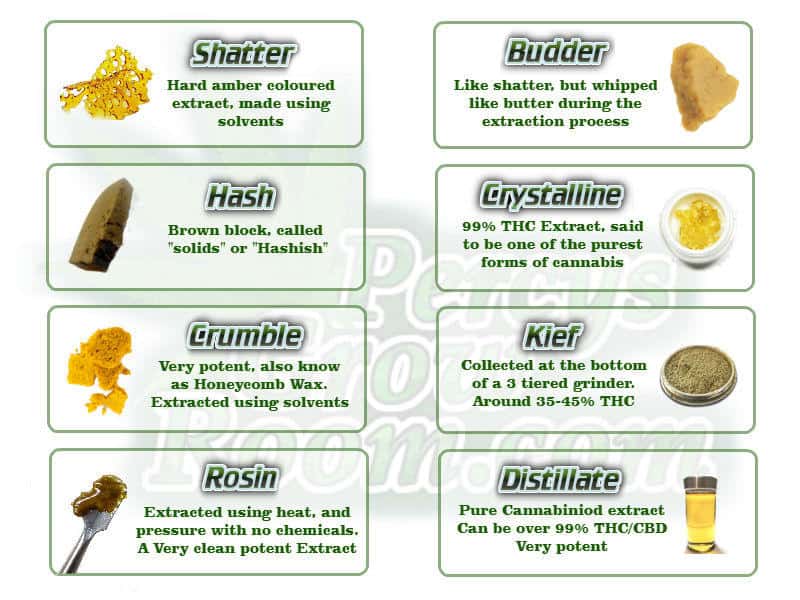 In this guide we will cover different types of cannabis extracts, what they look like, how they are made, and what their cannabinoid content is. Most of these extracts can be made easily at home, using trim from your harvest.

What are Cannabis Extracts

Cannabis, as you probably now, grows on a plant. A female cannabis plant will grow flowers, that are high in cannabinoids like THC and CBD. These flowers, once mature, are harvested and dried.

The dry buds, will be grinded, and usually put into a spliff/ joint, or blunt, and smoked.

Cannabis extracts are substances that are made up of cannabinoids that have been extracted from cannabis flowers. Usually, the concentration of cannabinoids is much higher in these extracts than just using flowers alone.

Different types of cannabis extracts will have different extraction methods, some use chemicals, some dont not. They will all each have their own cannabinoid content, as different methods will have a more efficient extraction rate than others.

Some of the extracts will have guides that you can read, right here on our website. You can use buds, or you can use tip leaf and popcorn buds. Making your own extracts is a great way to us up parts of the plant you would usually throw away.

Also, using cannabis extracts for edibles is perfect. Instead of using plant material like buds and leaf, that can taste bad, you can make many different types of extracts and mix that with your food instead. This increases the quality of the flavour and potency of your edibles.

Many of these extracts can be smoked in a joint. But some are best suited for “Dabbing”. This is where glass is heated, and the extract is dropped onto the hot glass to burn it. The smoke is then inhaled, similar to a bong hit.

For dabbing you will need a device that is very much like a bong, but has a glass bowl for the extract to be placed into.

Rosin is a cannabis extract that is made with heat and pressure, with zero use of chemicals. Buds, or left over trim, is pressed between 2 heated plates. This encourages a resinous sap to be extracted from the plant material, which is then collected, and when cool, it become a thick sap, known as rosin.

Dabbing has become very popular over recent years, and that is because of rosin. Because rosin is made with no chemicals, it is seen as a great, clean way to consume cannabis.

Usually, some glass will be heated, and the rosin will be pressed against the hot glass. This cause the rosin to evaporate, causing smoke, which is then inhaled. Most of the time, this will be done with a dabbing rig, which is much like a bong, but with a different attachment.

We have a guide on making rosin, if you would like to learn more, see our Guide on Making Rosin

Shatter, is a type of cannabis extract that it made by extracting cannabinoids from flowers using solvents. The solvent used can be propane, CO², but the most common solvent used the make shatter is butane.

Because butane is most often used to make shatter, it is sometimes called BHO ( Butane Hash Oil)

Shatter will be amber in colour, and will be hard, like toffee.

When it is cold, its can be brittle, and will break easily. This is where is gets is name, “shatter” from.

Shatter is regularly used for dabbing. It is somewhat easy to make, but to make it you need to have the right equipment and source the right kind of Butane.

We have a guide for making shatter in our cannabis growers forum. Feel free to take a look.

Hash is perhaps to most well known of cannabis extracts, and is also known as “hashish”. It is made from the resins of the cannabis plant.

The trichomes are separated from the plant in a number of different ways, this can be rubbed of with the hands to make “charas”, or cold temperatures can be used to “break off” the trichomes.

Hash will come as a brown block, which will vary in shade. The lighter brown it is, the cleaner the hash usually is.

Hash will be smoked in a bong, or in a joint with buds, or tobacco, as it will not burn in a join on its own.

You can make your own has at home using trim from your harvest. All you need is some dry ice, and a “bubble Bag”, or you can make it using ice and water.

Crumble is a concentrate that is very potent. Instead of the usual 15-25% THC you would get in your buds, crumble will have around 90% THC in it.

It is also known by some other names like ” Honeycomb Wax”, or “Crumble Wax”.

Cannabis Crumble will be yellow in colour, and resemble honeycomb, which is where it gets it nickname Honeycomb Wax.

Like hash, crumble won’t burn easily on its own. So is usually added to bud, or tobacco in a joint, or hit in a dabbing rig.

Cannabis crumble is most commonly smoked like Shatter, or Rosin, in a “Dabbing Rig“. But, it can also be used for cannabis edibles, and it also can be vaped.

Budder is another form of cannabis wax. Like crumble has a crumbling texture, budder has a texture like butter.

It is made is a similar way to BHO (shatter) where solvents are pushed through the buds to dissolve the trichomes. The solvents are then evaporated leaving behind a concentration of cannabinoids.

It is made in a similar way to shatter, but when it is being extracted, the mix is beaten and whipped like butter, which gives it a creamier look than shatter, which is clear.

Budder is used by either mixing it with a join of herb, or vaped. But it is most commonly used when dabbing. Budder will have a cannabinoid content over 90%. So it can be very potent and must be used responsibly, especially by new cannabis users.

Using Crystalline recreationally isn’t common, not only is it very strong, but there is no terpenes in it. So it will be flavourless, and is only really made for the active ingredients from the buds.

Cannabis Crystalline, may come as a white, amber or yellow crystal, depending on the extraction process.

Because the THCA isn’t heated during the extraction process, Crystalline should be smoked or vaped.

The THCA will only convert to the psychoactive compound THC after it has been heated. So if you intend to use crystalline for edibles, it should be decarboxylated first.

Kief is a cannabis extract that is very easy to make. You can simply collect it in a three tiered grinder. What kief is, is the resin glands from the buds. When you grind it, the small particles can break off.

In some grinders there is a layer of gauze that will separate kief, from bud, and collect it over time.

Kief can be found at the bottom of your grinder, you may have seen it before if you use a three tiered grinder regularly.

Because different filters in the grinders will have different sized holes, some kief can be a higher quality than others.

When looking for a grinder for collecting kief, look for one with the finest gauze possible. For the best kief collection, use a grinder with a filter between 150 and 270 LPI (lines per inch).

Kief is smoked like hash, you add it to a joint, or smoke it through a bong.

Cannabis Distillate is the purest form of cannabis you can get. It is made in a similar way to BHO, where solvents are used to dissolve cannabinoids. But the end process has so much more to it.

The oils are heated which decarboxylates the cannabis. This will convert the THCA or CBDA into their more psychoactive forms, THC and CBD.

With the rise in popularity in dabbing, and cannabis edibles, cannabis distilittes are seen to be the future of the cannabis market.

It is a pure, clean extract, and can be used in a lot of different ways.

You can make distilitte at home, but you must have the right equipment to get it done correctly.

You can make cannabis extract at home, using your own home grown. Sometimes you don’t have to use the buds, but just the sugar leaf. But of course feel free to use the buds of you want to.

You can save up your tip leaf and popcorn buds over time by freezing it. Doing so, will reduce the amount of waste left over after a crop, and bring you a higher yield. Or you can use your full harvest to make many different types of cannabis extracts.

The game is changing, and cannabis extracts are becoming a big thing as more and more countries legalise. If you would like more information about cannabis extracts, then feel free to ask for help in our cannabis growers forum.